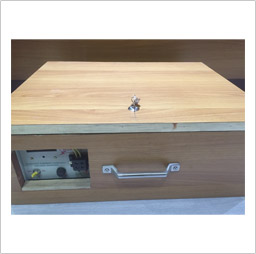 BRS is another unique product offering from the Group. The BRS has been designed to revive a “virtually dead” Battery.  The impetus to design this product by our R&D team came when we realized during our marketing endeavours that there is a huge inventory of “virtually dead” Batteries lying with Institutions, Defense, Telecom players, Solar players, Automotive OEMs, Logistic players, Banks, etc that are not being put to use due to its inability to store and hold charge. More often than not such a situation arises also due to non/sporadic use of the Battery as the process of sulphation continues unabated during this period as well. The State of Health of such Batteries is less than 60% and is not even potent enough to provide nano current that can allow our Battery Life Enhancing System to de-sulphate. The BRS works on similar technology that BLESS works, except that it has facility to provide external charge to the Battery. BRS is affixed with such Batteries for 2/3 days within which period the Battery parameters improve to the levels that can allow the Battery Life Enhancing System (BLESS) to work. The BRS then is removed and BLESS is attached and left thereat.BRS offers huge saving opportunity for such organisations. The product is eco-friendly and helps in procrastinating eventual disposal of Lead.