The second major Group Company is Amritasa Bio Technology (ABT), earlier name Shree Ram Raja Wood Packers (SRRWP), which the Group has recently taken over. SRRWP was one of the original TOT holders for manufacturing and installation of Bio-Toilets, the innovative technology pioneered by India’s Defence Research & Development Organisation (DRDO) to convert human excreta into methane and water within 48 hours without contaminating the soil. The system does not require any sewage system nor uses pits that other systems use. This has potential to tackle the national shame of open defecation, one of the priorities of the Government including the Swachch Bharat Abhiyan. Within a few months of taking over, it has already executed orders from the Government as well as the Private Sector. Most of these activities are within the ambit of CSR approved activities.

Only 11 percent of the Indian rural families dispose child excretion safely. Over 75 percent of India’s population have access to mobile phones but basic sanitation remains a distant dream. More than half of the population defecate in open in India (595 mn as per UNICEF). UNDP and UNESCO estimates that one-seventh of the worlds population do not have access to toilets, 60 percent of which reside in India. Untreated human waste causes contamination of food, fruits and vegetables beside causing organic pollution of water bodies and diseases such as typhoid, cholera, jaundice, viral gastroenteritis, diarrhea. Annually 2.4 million children in India die of diarrhoea caused by open defecation. Indian Railways spends INR 350 CR annually on rectifying rail corrosion caused due to human waste on tracks. Funds are allocated for construction of public toilets however, the harsh reality is that the country faces an acute shortage and mis-management of public toilets. Condition of public toilet is not hidden from anybody: they are in such filthy conditions that people normally avoid using public toilet if possible. Provision of public toilet is also a challenge as country and municipal areas faces acute water shortage. Waterless loo has not been so successful. Saving water by compromising on sanitation is certainly not the way forward hence we must look at ways where toilet generates its own water. Indian Railways has already taken the much needed step to set up bio-toilets in all coaches to ensure the entire rail network as zero discharge zone by 2019 and also the Railway Platforms. We hope that other nodal agencies would take similar initiatives.

Our value proposition: Set up bio-toilets

Defence Research and Development Organization has developed and patented an anaerobic process for treating human waste and converting it into water and gas. Amritasa Bio Technology (ABT) is an alliance partner with DRDO, being one of the original TOT holders. ABT is engaged in manufacturing bio toilets and bio tanks of various configuration using DRDO technology based on the anaerobic biodegradation process. 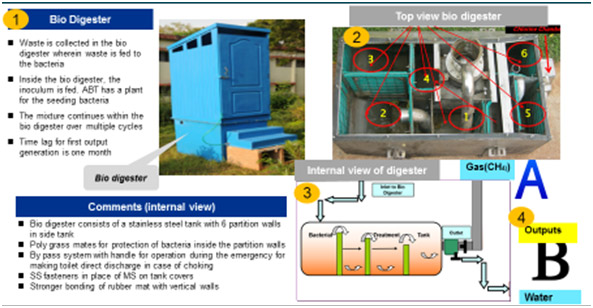 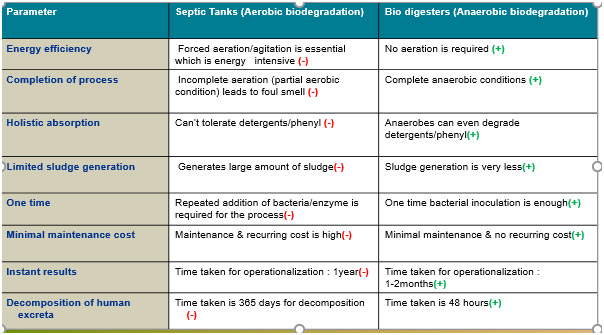 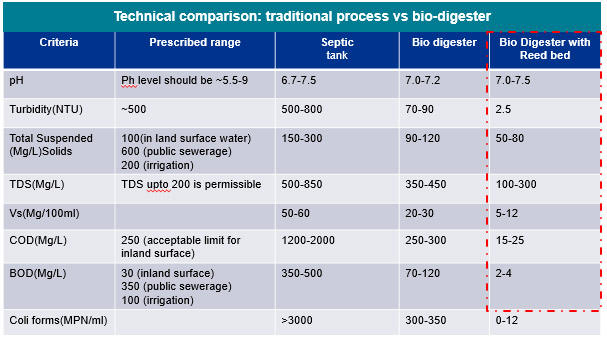 A private player manufacturing aerobic bio-toilets must obtain permission from the National Biodiversity Authority (NBA), Chennai, to import the bacteria, but most private players do not have such permissions. DRDO has given licenses to only few bio toilet license holders(TOT). ABTL is one of the few selected license holders (pan India less than 50). The partnerships that Amritasa Bio Toilet Ltd.  has built with the different types of companies are direct indications of the simplest means through which corporates can invest in clean sanitation practices. These partnerships are also examples of strategic CSR wherein companies are able to both fulfil business objectives through increased productivity with healthy workers and engage their community also consisting of their contract workers who are important stakeholders. This will especially be true for any company with a community presence, such as a manufacturing plant(s) or onsite construction. These partnerships also exemplify how partnering with a company can help a company scale in size and visibility very quickly.