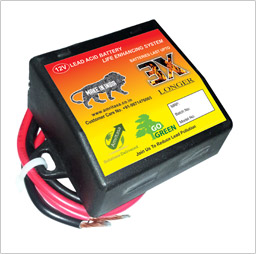 Sulphation or the sulphate crystals(white powdery) deposits on terminals of lead acid battery impacts the life of over 80 percent of batteries. Our product BLESS is based on a proprietary pulse technology that uses electronic pulses at calibrated frequency and amplitude to prevent pile up of sulphation. The broken lead sulphate crystals are then recycled into the electrolyte solution. The process enhances the storage capacity and releases desired power.  The pulses do not allow more than a miniscule sulphate accumulation, ensuring that the batteries still perform at their near peak capacities. It is well known that the rate of sulphation increases 40X for every centigrade increase in temperature, thus during summer season, delay in the de-sulphation process, even if BLESS is used, will be observed. The product does not work on short circuited, leaked, nickel cadmium batteries.

The performance of BLESS in the Automotive sector, in UPS, in Telecom towers, in Industries, Railways, Defense, Battery banks, Hospitals, etc. have been consistently good.

All lead-acid batteries consist of two flat plates—a positive plate covered with lead dioxide and a negative made of sponge lead—that are immersed in a pool of electrolyte (a combination of sulfuric acid (35%) and water solution  (65%). Electrons are produced from the chemical reaction producing voltage. When there is a circuit between the Positive and negative terminals, electricity begins to flow providing connecting sources with power. Sulphate Crystals, the white powdery deposit on the terminals of a lead acid battery gets deposited with aging-either through long usage or remaining unused for periods of time. This reduces the battery’s ability to accept, hold and deliver a charge. With time, these crystals become so dense that the plate surface no longer is able to accept or release energy.  While there are several reasons for battery run down like self-discharge, insufficient run time, short circuit, leakage, faulty electrical Systems, physical damage, etc, but sulphation, impairs the life of over 80% batteries in use.

There are eight major reasons for pre-mature battery failure:

A battery that’s at the end of its useful life can’t be recharged enough to restore it to a useful power level and is declared ‘dead’ and prescribed for replacement. Recharging does not improve the current retaining capacity.

In normal circumstance, BLESS extends the life of batteries up to 3X. The pace and degree of recovery, however, does depend upon the amount of crystallization. The desulphation in extreme cases may not lead to full recovery but to desulphate and hold it at between 50-60% levels, which is adequate to keep the Battery running for upto 3X time.